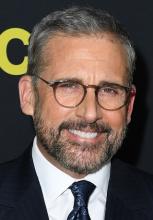 Pepsi hired Cardi B and Steve Carell for a Big Game commercial.

Both stars released teasers on Wednesday. Steve Carell sits a diner reading the script for the commercial. Then laughs for 15 seconds.

Cardi taps a Pepsi can with her long, manicured nails. Then ends the quick, six-second video with her trademark “Okurrrr.”